Sleep apnea can cause many serious issues with your health. It can make you feel fatigued, give you morning headaches, and even make it difficult to concentrate or remember things. It can also increase your risk for many serious health conditions like heart disease, high blood pressure, and diabetes. Another serious condition linked to sleep apnea is Alzheimer’s disease, which is one of the most common forms of dementia. 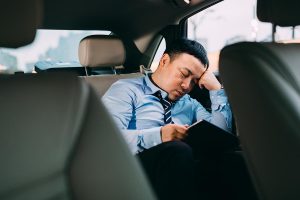 If you have untreated sleep apnea, it may increase your risk for developing Alzheimer’s disease.

Alzheimer’s disease affects millions of Americans and accounts for about 70% of all cases of dementia. Some of the most common signs include:

With this condition, the healthy cells in the brain start to die, creating a gradual decline in things like memory, executive function, and verbal learning. Eventually, the person can’t live independently because of cognitive declines, and complications from the disease often lead to death.

Sleep Apnea May Increase Your Risk for Alzheimer’s Disease

Alzheimer’s disease is associated with a lot of toxic changes in the brain. One common change is a buildup of proteins that destroy nerve connections and kill brain cells. Two of these proteins are tau and amyloid.

Recent research shows that people with OSA may have a higher risk of developing tau and amyloid buildup in the brain. Therefore, this suggests that OSA may increase your risk for Alzheimer’s.

One study from 2019 saw that people with OSA have more tau buildup in the brain than those without this common sleep disorder. Tau is a type of protein that is important for keeping the neurons in your brain stable. However, Alzheimer’s disease is associated with an abnormal buildup of this protein, which can actually harm the structure of the neuron and cause it to essentially fall apart. Therefore, higher levels of tau in the brain can be a biological marker of Alzheimer’s disease.

In the study, the researchers looked at 288 people who were 65 years old or older that had no cognitive impairment during the study. They used observed apnea events (periods of not breathing or breathing shallowly during sleep observed by a bed partner) to assess whether the person had OSA or not.

They found that the people with OSA had about 4.5% more tau in the temporal lobe (a part of the brain that’s critical for memory) than those who didn’t have sleep apnea. The researchers concluded that because of this association between OSA and tau, sleep apnea sufferers may be more likely to develop Alzheimer’s. They also said that, while there is no current research on this, it may indicate that sleep apnea treatment can help reduce the risk of Alzheimer’s for OSA patients.

There are other studies that also seem to confirm the association between sleep apnea and Alzheimer’s. For instance, research from 2017 also saw that people with sleep apnea had a higher risk for amyloid deposits in the brain. Like tau, amyloid is a type of protein that can build up in the brain and form deposits, also known as amyloid plaque. Amyloid deposits typically form in between the nerve cells, which can interfere with neuron firing in the brain. Once again, this is another potential marker for Alzheimer’s disease.

Why Is Sleep Apnea Connected with Alzheimer’s Disease?

There may be many reasons for the connection between OSA and Alzheimer’s. Experts are still studying the relationship. However, there are several theories that may help explain why people with OSA are more prone to Alzheimer’s. For instance, sleep fragmentation and intermittent hypoxia from OSA may be partly to blame.

Sleep Apnea Can Fragment Your Sleep

Sleep apnea involves periods of not breathing or breathing shallowly while you sleep. When this happens, your body fights to wake up to start breathing again. This can lead to serious sleep fragmentation because your sleep is constantly interrupted. You also may not be able to reach deeper levels of sleep with untreated OSA. Over time, sleep fragmentation may cause serious problems, including daytime sleepiness, irritability, and cognitive problems. It may also hold some of the answers for the link between OSA and Alzheimer’s disease.

Sleep is When Your Brain Performs Necessary Housekeeping

Sleep isn’t just a time to dream and rest, it’s a necessary biological process that helps your body heal. One important function of sleep is acting as the time for your brain to do some necessary housekeeping. Basically, during sleep, your brain can actually clean out protein buildup like tau and amyloid. Therefore, good quality sleep may be important for reducing these proteins commonly associated with Alzheimer’s disease.

Intermittent Hypoxia Stresses the Brain Out

Phases of low oxygen can cause serious stress to the brain. Brain cells are incredibly vulnerable to low oxygen levels, even dying off within just minutes without oxygen. This can make it difficult for the brain to stay healthy if you have sleep apnea, which may also contribute to the development of Alzheimer’s disease.

Now, if you have sleep apnea, you might be pretty worried about your risk for Alzheimer’s disease after looking at all this evidence. We have good news, though. Research also suggests that OSA treatment with CPAP therapy may reduce Alzheimer’s risks and improve cognitive function for people who have Alzheimer’s. Therefore, getting treated is something you can change about your lifestyle that may decrease risks of Alzheimer’s disease.

A study from 2021 found that people who treat their sleep apnea with CPAP therapy may have lower risks for Alzheimer’s disease. Continuous positive airway pressure (CPAP) therapy is the gold standard for sleep apnea treatment. It works by increasing air pressure in your airways to help prevent them from collapsing and causing an apnea event. CPAP has many positive effects for sleep apnea patients, including improvements in symptoms as well as decreased health risks.

The study looked at over 50,000 OSA patients who were age 65 or older. Those who used CPAP therapy were less likely to have Alzheimer’s and other forms of dementia. Therefore, CPAP may help reduce your risks for Alzheimer’s.

Achieving your health goals is easy with our men’s health clinic. Our team at Low T Center is here to help you improve your health through diagnosis, treatment, and treatment monitoring for a variety of common conditions you may have, including sleep apnea, low testosterone, and erectile dysfunction. We are here not only to help improve your health, but help improve your life through simple, affordable, and convenient health care solutions. If you think you have sleep apnea, take the first step toward better health now by making an appointment at one of our clinic locations or ordering home sleep test online now.