Home » The Relationship Between Sleep Apnea and PTSD

The Relationship Between Sleep Apnea and PTSD

There may be a connection between obstructive sleep apnea (OSA) and PTSD. People who suffer from PTSD may have a higher risk for developing sleep apnea. Also, people with untreated sleep apnea and PTSD may experience worse PTSD symptoms. In this article, we will explore the relationship between OSA and this serious mental health condition.

What is Obstructive Sleep Apnea? 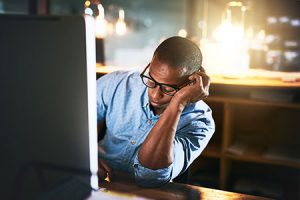 People with PTSD may be more likely to suffer from obstructive sleep apnea and also sleep apnea may worsen PTSD symptoms.

Obstructive sleep apnea is a common type of sleep disorder. Sleep apnea is a condition where you stop breathing or breathe shallowly for seconds or minutes at a time while you sleep, also known as apnea events. During these apnea events, your blood pressure rises and your body releases the stress hormone cortisone to wake you up and get you to breathe normally again. Obstructive sleep apnea is where your soft palate or your tongue relaxes and blocks the upper airway, causing these periods of breathlessness during sleep.

Sleep apnea can cause many disruptive symptoms, including:

Also, many people seek diagnosis and treatment for obstructive sleep apnea because their partners observe them stop breathing at night or notice them waking up gasping throughout the night. Many of the symptoms of sleep apnea can affect everyday life. For example, many people with sleep apnea have difficulty performing well at work and even have a higher risk for accidents at work or while driving.

Obstructive sleep apnea can also have other negative effects on your health. Because you wake several times during the night with sleep apnea, you can suffer many of the same effects of sleep deprivation. Long-term effects of untreated sleep apnea include difficult to control high blood pressure, low libido, and erectile dysfunction.

PTSD stands for posttraumatic stress disorder. It is a mental health condition that causes people to have distressing thoughts and feelings related to a traumatic experience or event, such as war, serious accidents, major injuries, natural disasters, or assault. PTSD is common for combat veterans. Veterans have an estimated three times higher likelihood of developing PTSD. However, anyone that experiences or witnesses a traumatic event can develop PTSD.

Some symptoms of PTSD include:

There are several different criteria for a PTSD diagnosis. The first is that you experienced or witnessed a traumatic event, learned that someone close to you experienced a traumatic event, or are regularly exposed to other people’s trauma. The second is that you experience the trauma over and over again through your symptoms, such as flashbacks and nightmares. The third is that you avoid things that remind you of the trauma. Fourth is that you have negative thoughts or feelings that started or got worse after the trauma, such as feelings of guilt or shame. In addition, PTSD diagnosis requires that you are more reactive or alert after the trauma. Symptoms must also last for more than one month.

People who suffer from PTSD are more likely to also have obstructive sleep apnea. One study published in the Journal of Clinical Sleep Medicine looked at the relationship between OSA and PTSD in a group of 195 veterans. The researchers used a common obstructive sleep apnea screening tool to assess the risk for sleep apnea and found that the participants who had more severe PTSD had higher risks for OSA. The study estimated that between 40% and 98% of veterans with PTSD also have sleep conditions, such as OSA. Therefore, the researchers concluded that there may be a link between PTSD and obstructive sleep apnea. There may be many different reasons for this, but researchers believe the sleep-related PTSD symptoms, such as insomnia and nightmares, may help explain some of the connection.

Also, untreated obstructive sleep apnea may make PTSD symptoms worse. According to the Sleep Foundation, people with both PTSD and obstructive sleep apnea typically have more severe symptoms. For instance, people with both conditions are more likely to experience severe depression, have a higher suicide risk, increased risk for substance abuse, and decreased quality of life. In addition, for people under 70 years old, people who suffer from both PTSD and OSA have a higher risk for experiencing an early death.

In addition, some believe REM sleep may also play a role in the connection between PTSD and sleep apnea. REM sleep may support fear extinction, which can help reduce fear associated with certain triggers. Because OSA can negatively impact REM sleep, some experts also believe that this may be why people with PTSD and untreated sleep apnea typically experience more severe PTSD symptoms.

If you have both sleep apnea and posttraumatic stress disorder, CPAP therapy may help improve your symptoms. As we’ve mentioned, PTSD symptoms may be more severe for people with untreated sleep apnea. However, some studies have found that sleep apnea treatment improves PTSD symptoms. For instance, one small study from 2014 looked at 69 veteran patients with both sleep apnea and PTSD. The patients were treated for their sleep apnea with continuous positive airway pressure (CPAP) therapy. The researchers found that those using CPAP therapy had a significantly lower risk for nightmares. On average, the participants had nearly half the number of nightmares per week than before beginning sleep apnea treatment.

Unfortunately, CPAP therapy adherence is frequently low for people with PTSD. Therefore, it’s important to work with a men’s health management team to find customized solutions that work for you. One important way our providers can help you with CPAP therapy is finding the right mask for you. We are here to help you find the most comfortable mask to help you feel better about using your CPAP device. In other cases, we may explore other sleep apnea treatment options. For example, we can look at positional therapy options if your sleep apnea is related to sleeping on your back. Our team is here to find customized treatment solutions so you can address your health and start feeling better.

Our team at Low T Center is here to provide quality, convenient healthcare for men. We are dedicated to finding customized men’s health management solutions based on your lifestyle. Whether you’re experiencing sleep apnea symptoms, low testosterone symptoms, or other health conditions, we are here to help you feel your best. Schedule an appointment with our team to learn how we can help you improve your health.