Home » How Sleep Deprivation Takes A Toll On Your Immune System

How Sleep Deprivation Takes A Toll On Your Immune System 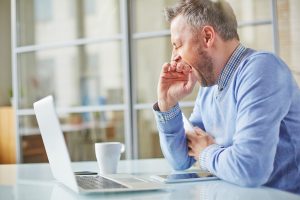 Even if you think you are getting the recommended seven to nine hours per night, your sleep quality could still be suffering. Home sleep studies can help pinpoint the cause of poor quality sleep. Sleep deprivation can weaken the immune system and make a person more likely to get sick.

Sleep Deprivation on the Rise

According to the Centers for Disease Control and Prevention, people in the United States sleep for 90 minutes to two hours less compared to 100 years ago. Around 33% of employed people are getting fewer than six hours of sleep each night.

The Role of Cytokines

While people sleep, their bodies produce and release proteins called cytokines that target any inflammation or infection that a person is suffering from. A lack of sleep inhibits the production and release of these proteins, and the body does not fight illness as effectively. Sleep issues can even cause vaccines to be less effective since the body does not respond to them as well.

A study that appeared in the journal “Sleep” looked at the effects of sleep deprivation on pairs of identical twins. Unlike most studies, it used “real world” instead of lab conditions and determined that chronic sleep deprivation depressed the immune system. According to researchers, this supports other research that has found sleep-deprived people exposed to a rhinovirus are more likely to get the virus.

Making Up For Lost Sleep

One recommendation is that people can counter some of the effects of sleep deprivation by taking two half-hour naps, one in the morning and the other in the afternoon. However, this schedule is not practical for many people. Furthermore, if the lack of sleep is due to a disorder like sleep apnea, that same disorder may disrupt daytime naps and make them less effective as well. A better solution might be to visit a men’s health clinic to discuss how home sleep studies might diagnose the problem.

Sleep apnea causes people to stop breathing repeatedly throughout the night for brief periods, which disturbs their sleep. People with this condition may wake frequently even though they do not realize it. Home sleep studies can identify whether a person is suffering from sleep apnea. The long-term sleep deprivation that results is one of several ways the condition can have a detrimental effect on a person’s health.

To schedule a sleep study and find out more about sleep apnea treatment or other solutions to sleep issues, make an online appointment with the Low T Center.

Is There a Connection Between Sleep Apnea and ADHD?

The Relationship Between Sleep Apnea and PTSD